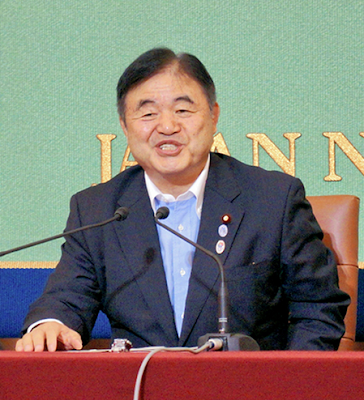 Toshiaki Endo Olympics minister attended a press conference held at the Japan Press Club in Tokyo on July 24, and expressed his idea to introduce cooking ingredients produced in Fukushima prefecture for consumption in the athletes' village of the 2020 Tokyo Olympics and Paralympics. His aim is regarded as boosting efforts for recovering crippled economy of the prefecture after the nuclear disaster at TEPCO’s Fukushima Daiichi nuclear power plant in March, 2011. He also stated again his willingness to hold some of competitions in the areas affected by the Great East Japan Earthquake.

“We can also use foodstuff from Fukushima prefecture in the athletes’ village. We are eager to strengthen our bonds with the disaster-affected areas in many varies ways,” Endo said.

According to the state Tokyo Olympic and Paralympic Games Headquarters Secretariat, cooking ingredients consumed at the athletes' village are to be decided by the Tokyo Organising Committee of the Olympic andParalympic Games before the competitions kick off. The government, while studying the introduction of food products from Fukushima prefecture in order to assist its recovery and to wipe off reputational damages, is expected to persuade the Tokyo Organising Committee to do so.

Endo also discussed about holding competitions in the affected areas, and underlined his willingness to hold the preliminaries (first-round tournament) of the additional events, decided hereafter, in Fukushima prefecture, telling, “If possible, we want to have the trial heats there.”

Fukushima, stricken by one of the world's worst-ever nuclear disasters in 2011, wants to host baseball and softball games at the 2020 Tokyo Olympics -- and hopes to convince athletes to eat the local food.
……

"Fukushima has suffered a lot of financial damage caused by misinformation," he said. "We would like to be able to sweep away those harmful rumours. Fukushima has venues capable of hosting these games."

"Fukushima's produce is safe and will be safe," insisted Kuwajima. "Of course we would like athletes and visitors from overseas to eat our food."
Read more …


Japanese version of this post for your Japanese speaking friends;

See also; the official site of the  “Fukushima Prefecture”

Pick your own strawberries (Soma City)

Fukushima farmers describe what it's like to harvest poisoned food..